A few months ago, (before the Thailand floods and hard drives prices went through the roof), I purchased a new 500GB 7200RPM 2.5″ SATA hard drive to replace the 250GB hard drive in my 2009 all aluminum 13.3″ Macbook.  Changing the hard drive was a preventive measure, a job of changing it now, rather than AFTER a hard drive crash.

Before changing out the hard drive, I did some research on the web about “cloning” my old hard drive onto the new one.  After a lot of research, I settled on “Carbon Copy Cloner“, a free, shareware program written by Mike Bombich.  I found this program much easier to use than Apples’ Time Machine, and was able to do exactly what I wanted to do, make an exact clone of the 250GB hard drive.  I used an external USB 2.5” SATA hard drive case that I already had, placed the 500GB drive in it, and “cloned” the 250GB hard drive to the new 500GB hard drive.  After cloning, I installed the 500GB hard drive into the Macbook.  All in all, a fairly easy job, removing a few small screws, installing the drive, putting the screws back in, and I was done!  The swap out process took no more than 10 minutes.

Since the hard drive swap, I’ve used the cloner to perform incremental backup’s without a hitch.  If you have a Mac, do yourself a favor and check out Mike Bombich’s Carbon Copy Cloner.  And Mike, my $15 donation to your project is in the mail.

As most of you know, I’ve been a big fan of Vipre Antivirus from Sunbelt Software for about 4 years now.  However, they were bought out by a big corporation about a year and a half ago.  Since then, the quality of their product has taken a nose dive, so this year when it came time to renew my subscription, I decided to move to Kaspersky’s Internet Security 2012 package.  I have been using this at work, and we use Kaspersky’s AV on all our managed workstations and their Security Center software on all our Windows servers.

I can’t tell you how many computers that I fix every year that have Norton, McAfee, AVG, Avast, Vipre, or some other brand of either paid or “free” AV software.  I have yet to repair a computer with up-to-date Kaspersky software loaded and activated on it.

If you follow the link listed in this article, you will be able to purchase a 3 user license version of Kaspersky Internet Security 2012 for only $19.99.  That’s $60 off the regular retail price, and actually cheaper than just the AV product.  I don’t know how long this price will be available, but even if you still have some time left on your AV product, buy this to replace it with when the time comes.

Like most AV and IS products, there is a large download to do AFTER you install it to get the product up-to-date.  But once it is installed, you can just “set it and forget it”, because it works like a champ!

Do yourself a favor and take advantage of this special pricing right now! 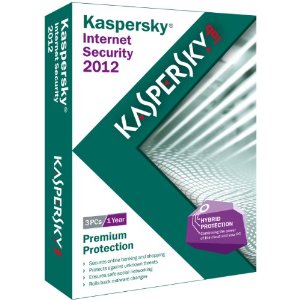